“Artist Andy Roche also questions the relationship between religion and its mode of delivery. “Black Iron Vatican,” the title of Roche’s exhibition, conjures death metal’s conversion of crucifixes, religious pageantry and paraphernalia to a total aesthetic. Sweaty crowds of long-haired teenagers could be mistaken for a tear-stained, testifying mass; music videos could be televangelical sermons. Roche further compounds the similarities by creating bedroom posters of imagery taken from hand-raising believers captured through the fuzz of a TV screen. Some of these posters are hung from metal rods in retail-style slats.
While it’s certainly true that a teenager can buy his or her rebel uniform off the rack from Hot Topic, Roche does not only point to the wholesale commodification of this lifestyle. The video installation “Tetedemort” shows a Passion play in some rural woods interspersed with footage of grave-markers. Filmed with Super 8 and a 1970s-style rock soundtrack, the video expertly re-enacts a vintage feeling. Harolding with Roche, the viewer is treated to an insider’s peek at theatrical death (the Passion play) and a cemetery like an old man’s mouth, filled with nubby-toothed graves. In another video we find Roche performing a Pre-Raphaelite-like new-age bit, screeching en plein air. As if magnifying the sublimated paganism within mainstream religious culture, Roche constructs the stance of the typical adolescent outsider. It’s sad to think that such fervor smoothes over as adulthood begins, but if it doesn’t, it turns the adult into a fundamentalist” (Newcity Chigaco.com) 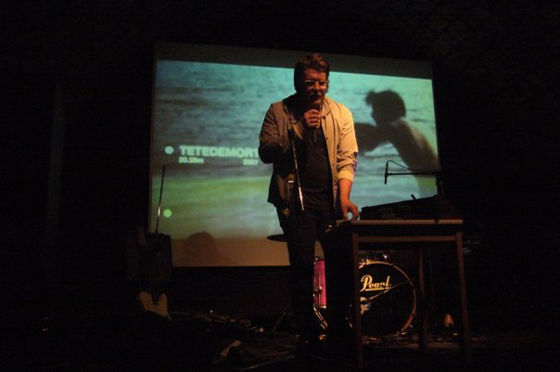